Number of blogs returned: 1 to 1 records of 1

Eximm in Partnership with AFL QLD for Pride Round Cup 2022 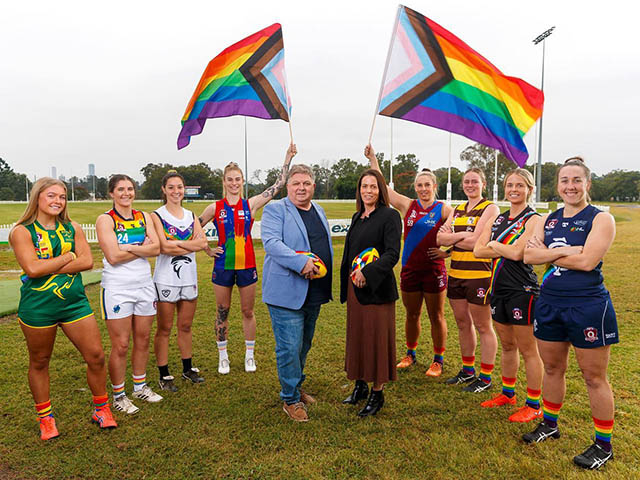 Eximm are proud to have been in Partnership with AFL Queensland for the July Pride Round that took place over the weekend. Aussie Rules players across Queensland, played with pride in celebration of the third annual event.

Guernseys, socks & flags in all colours of the rainbow were donned in an effort to show support for the LGBTIQA+ community in Queensland, celebrating and promoting inclusion and diversity.

Yeronga, Brisbane hosted all Round 16 Bond University QAFLW matches at Leyshon Park, whilst Broadbeach on the Gold Coast hosted five matches across their men’s and women’s teams and Morningside in Brisbane also made a day of it.

In the days leading up to the weekend’s matches, AFL Queensland hosted live streamed information sessions with Pride Cup Australia to educate stakeholders and participants about the significance of Pride Round for the LGBTQA+ community.

Trisha Squires, Head of AFL Queensland, said the Pride Round, was one of the highlights of Queensland’s Aussie Rules calendar.

“We are also so grateful to have EXIMM throw their support behind Pride Round for a second year,” she said.

“Since it’s inception in 2019, Pride Round has grown bigger and better each year, with more clubs joining on to participate in this great initiative."

“At the AFL in Queensland we are passionate about our players, coaches, umpires, supporters and administrators feeling safe and included in our game and we believe Pride Round really brings our community together.”

“EXIMM is really excited to be partnering with AFL Queensland for a second year to celebrate Pride Round,” Goodman said.

“Pride Round promotes LGBTQIA+ inclusion in not only the sporting clubs across the state, but within the community in general."

“The clubs love getting involved, and there’s real change becoming apparent as we see more clubs continue to buy into not just the concept each year, but the education side of it too."

“EXIMM is a big supporter of diversity within the community, which is why we love to be part of such an important event.”

To see more of what took place over the weekend at the July Pride Round 2022 visit our Socials.